Why politicians in Delhi don't care about south

April 27, 2017
Theatricality and deception are powerful agents against the uninitiated. I was reminded of this line from Christopher Nolan's Batman series when I read about Tamil Nadu's farmers' protest in New Delhi. Their peaceful protest was filled with theatrics such as hold ing skulls of dead farmers in their hand and live rats in their mouth. Unfortunately, they have returned back to Tamil Nadu after 100 days with no demands met.

This is because our politicians aren't uninitiated. Heck, no politician in the world is uninitiated. The very best example would be one Mr.Arvind Kejriwal who as a IIT graduate and a qualified IRS, came across as a honest man up against corruption and nothing else. Now, he is friends with likes of Lalu Prasad Yadav, Mamata Banerjee and is blatantly more power hungry than the seasoned politicians.


There is very deep rooted misconception in India that being a politician is a selfless job. While we make the pact with our country that our responsibility towards it would only be to the extent of paying taxes(which reports show that only 2% honour), we expect the politicians who are investing their whole life into it not to make any profits. The profits that politicians expect might be of different forms- fame, adulation, respect, kickbacks, power or something else. Hence, parties are like corporations that are working this term to ensure that they get the contract for next term.

Ok, what has all this got to do with deception you ask? It is deception which is best represented by statistics like this - 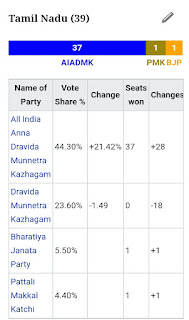 These are results for 2014 general elections for the seats from Tamil Nadu, where 37 of the 39 seats were won by a regional party or call it a not pan-india party if you are specific about the terms. It is this deception by the voters, of voting for local parties, no matter the kind of work done by the government at the center. There is no reason for a nation-wide party to work for a state's welfare if it is sure that it won't translate into votes in the next elections.

Is it time for India to have only national parties contesting general elections?